I own a small woodlot in Cumberland County; it's a small island of forest in a sea of clearcuts. Most of the clearcut land around me is owned by the Irving forestry interests or the Crown, and other parts are owned by non-resident and dis-interested folk who probably have never visited their woodlot more than once in their lives.

There are two big pressures on the forests in my neighbourhood: one is government policy, and the other is energy prices.

This blog explores the intersection of those two pressures.

Until very recently, the market for natural gas was pretty much the continent on which the gas was found. The market for crude oil is the whole world because the oil can be poured into tankers and shipped anywhere, but natural gas mostly travels by pipeline and so is much more restricted. Gas can be liquefied and shipped around the world but that becomes a whole different market.

The price for natural gas on continental North America is most often set at Henry, Louisiana - the Henry Hub. Many pipelines meet here, and many contracts for gas are settled here, either by taking delivery of the gas or rolling the contract over for another month. The price of gas has been settling lately between $2.50 and $3 per thousand cubic feet. Natural gas is considered fungible - one bit of gas is as good as another - so the gas that a producer puts into the pipeline system may not be the same molecules that the customer takes out at the other end. Of course, standards are maintained - the gas must be free of contaminants and must have a Btu content within a specified range.

Gas in North America is most often sold in quantities of 1,000 cu. ft. (Mcf), which contains approximately 1 million Btu's  (MMBtu's)     Another useful approximation is that 6,000 cu.ft. of gas has the same theoretical  energy  content as a barrel of crude oil. So, when natural gas is selling for $3 per Mcf it means that the gas is about equal to crude oil selling for $18. Crude oil has been selling in the $60 to $70 range this spring.

It happens that our Canadian energy unit - the gigajoule - is approximately equal to both 1,000 cu ft of natural gas, and 1 million Btu's; both of these are common energy units in other jurisdictions. On this continent, natural gas is most often priced (at wholesale) in units of 1,000 cu ft, which is very conveniently approximately equal to 1 gigajoule (which is the unit that Heritage Gas uses when it charges its Nova Scotia customers).

The retail price of gas - delivered to a home - is typically a little more than twice the wholesale price, so it is common for homeowners to pay $7 or $8 per gigajoule (GJ) of natural gas energy ( = 1,000 cubic feet (Mcf)). That GJ of natural gas has the same theoretical heat energy content as 26 litres of furnace oil (valued at $27 last February in Nova Scotia) or 39 litres of propane (valued at  $27 to $35). When natural gas is cheap, it represents great value. As we shall see, gas is not always that cheap.


So here's our situation on Nova Scotia: 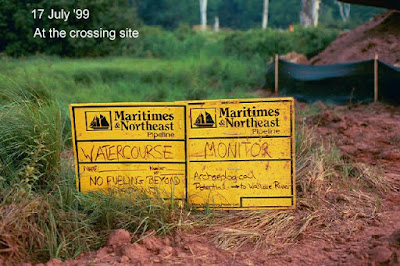 Here's a measure of just how constrained the Boston natural gas market is. There was so little spare gas available in Massachusetts last winter that they actually imported liquefied natural gas (LNG) into the market. Irving Oil in Saint John brought in three LNG cargoes, some of which they used themselves, and some of  which they fed into the pipeline. Other players brought two cargoes of Russian LNG into New England!  This at a time when President Trump is imposing sanctions on Russia and attempting to bully Europe into not buying Russian gas, and here is Boston buying Russian gas! Twice!  The price for LNG cargoes usually starts at $12 - $14 per GJ, as opposed to about $3 for Louisiana gas in the pipeline. No wonder that Halifax homeowners were paying $19 /GJ!

And our M&NE straw sucks from that tiny market. Our Nova Scotian natural gas future is linked to a market so restricted that they have to import Russian natural gas to get through the winter.

One of the greatest economic curses that Nova Scotia endures is elsewhere called the "psychology of previous investment"; having invested all of that money in some project we feel that we cannot abandon the investment. Building that Point Tupper biomass plant for many millions of dollars was a huge mistake, but now that it can be run, it must be run.  So we chip old growth forests to power home entertainment centres in households across the province, and to ship power to Newfoundland so they can save $50,000 per day by not burning oil in their own plants.

Having built the infrastructure for the delivery of natural gas we cannot or will not abandon it, so we import foreign gas at great expense and at considerable inconvenience.

So, what to do? It appears that our biggest natural gas problem in Nova Scotia is the difficulty in sourcing reasonably priced gas in the New England market, and that' not something that we can fix on our own. When (and if) the New Englanders build more pipelines into their region, we will benefit. When (or if) Heritage Gas gets its storage caverns operational in Alton we will see much less volatility in pricing as they will have gas on hand when the heating season starts.

Some larger customers are already switching from natural gas to propane. It's not terribly hard to do, although one has to build an on-site tank to hold the propane, and there are small modifications required in the furnace as the propane has to be diluted with air as it enters the combustion chamber because propane is much more energy-dense than natural gas.

Propane comes from a number of sources, including from oil and gas wells as a by-product of extraction, and as a by-product from the refining of crude oil. It can be delivered to our region by truck or by railcar, and the price only spikes occasionally.

Ultimately, we will have to explore the possibility of building a liquefied natural gas receiving station in Halifax, and bring in our own cargoes of Russian  or Qatari LNG.

Until we resolve this natural gas problem we will continue to clearcut and chip our forests as the predatory capitalists who own our pulp mills search for the cheapest sources of energy. And with the Province giving away our forests, and in some cases paying the companies to take the forest we will end up with no natural gas and fiercely degraded woodlands.